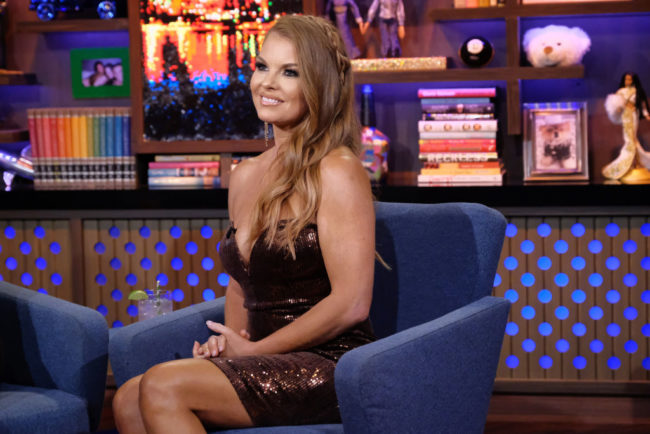 Brandi Redmond is an American TV personality and former cheerleader for the Dallas Cowboys from Dallas, Texas. She stars on the Bravo TV series The Real Housewives of Dallas. Brandi Redmond net worth as of 2021 is estimated to be around $4 million.

Brandi Redmond was born July 10, 1978, in Memphis, Tennessee, but was raised in Austin, Texas. Brandi maintains a private childhood, and not much is known of her upbringing. She attended Texas Women’s University and earned a Bachelor’s degree in science in sociology. Redmond was involved in cheerleading as a high school and college student.

Brandi participated in beauty pageants and was crowned Miss Austin Teen. She also worked as a model and posed for the cover of Varsity magazine. Brandi and her husband Bryan are high school sweethearts and have two daughters and one adopted son.

Redmond was an avid cheerleader and ended up on the squad for the Dallas Cowboys. She cheered for the team from 2000 to 2005. Her most memorable experience from cheering was the team’s tour overseas. The cheerleaders traveled to Iraq, Kuwait, and Afghanistan where they visited men and women in the military.

Aside from cheerleading, Brandi worked under a government contractor and earned a top-secret security clearance. When she had children, she became a full-time mom. In 2017, she started an online clothing boutique called Brandi Land.

Related Posts  Alison Victoria Net Worth: How Rich is HGTV Star in 2020 Actually?

Additionally, she supports charities such as Operation Smile and Folds of Honor.

Brandi and her husband Bryan joined the cast of Real Housewives of Dallas in 2016. The show chronicled Redmond’s unsuccessful attempt at having a third child, and eventually the adoption of her son.

Brandi has come under fire recently for a resurfaced video of herself mocking Asians. Many fans feel that she should be fired from the show. Brandi issued a public apology for her remarks and announced that she checked into a wellness center. She hopes to reflect and better herself.

As of 2021, Redmond has a net worth of $4 million. She has gained most of her wealth through TV appearances. Her husband Bryan works for real-estate business Suntex Ventures, which adds to their net worth.