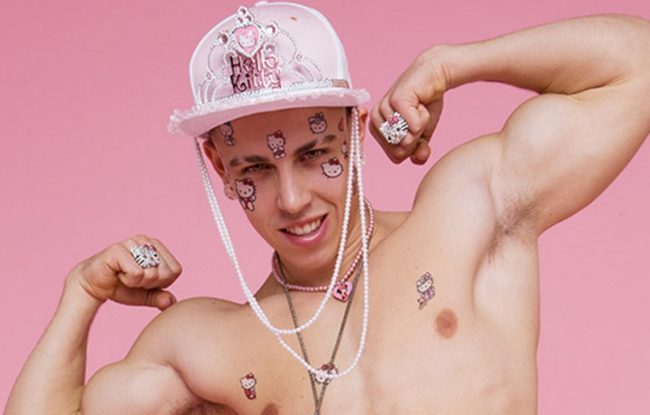 Jakob Kasimir Hellrigl, known as Candy Ken is an Austrian rapper, model, TikToker, and artist. He is popular for his unique style inspired by Hello Kitty and Japanese Kawaii culture. As of 2020, Candy Ken net worth is estimated to be $2 million.

Some facts about Candy Ken

Jakob was born on the 27th of July 1992 in Bregenz, Austria. He attended Wenatchee High School at Wenatchee, Washington for a year. There he played football. High school really has a special place in his heart. There he met his two female best friends Isabella and Payton, who later encouraged him to start his music career.

He attended  Lette-Verein college in Berlin, where he studied photography and film design but dropped in 2014. While being in college he made the gender-bending persona of Candy Ken.

Candy Ken launched his video series “Welcome to Candy Land” on YouTube in 2014, produced by Lets Go Radio. The series was later re-made as a short film and won an award at the Austrian short film festival Alpinale in 2015.

In September 2015, Ken launched his other EP named “Candy Ken Paradise” produced by DJ Smokera and distributed by Spinnup.

Two months later he uploaded his third EP “Daddy 69”. The EP contained a total of five songs and five videos. Candy also had his moment on the very popular show Jimmy Kimmel Live! in April 2018. He appeared on a segment of “Guess Who’s High”.

After the release of his three EP’s, finally, in 2016 he released his first album “Real Talk”. The album contained twelve songs. Ten of them were made in collaboration with the rapper Gigi Tays. He said that his main influence and inspiration for the album was the American rapper Riff Raff.

The talented rapper didn’t stop there. He also has a modeling career. In 2015 on Instagram, he was recognized by stylist and Diesel brand creative designer Nicola Formichetti. Ken was called for a photo-shoot. His pictures then appeared in the Japanese magazine FREE. He was booked as a fashion model for Diesel at the Pride Week in New York City. Candy even made a runway appearance at Berlin’s alternative fashion week.

In addition to that, Candy Ken is also popular on various social media platforms. He has over 10.5 million fans on TikTok while his Instagram account has over 390K followers. His videos on TikTok have been liked over 350 million times.

Before being in front of the camera lens, he was behind them. He made a lot of photoshoot sessions for magazines like Vogue and Paper. After that, when he was the center of attention, he really went upwards in his career.

As of 2020, Candy Ken’s net worth is $2 million. That income is from his rapping career, modeling, and also TikTok, where he shows his rich lifestyle. Recently he also started filming vlogs on his YouTube channel that has almost 200k subscribers.