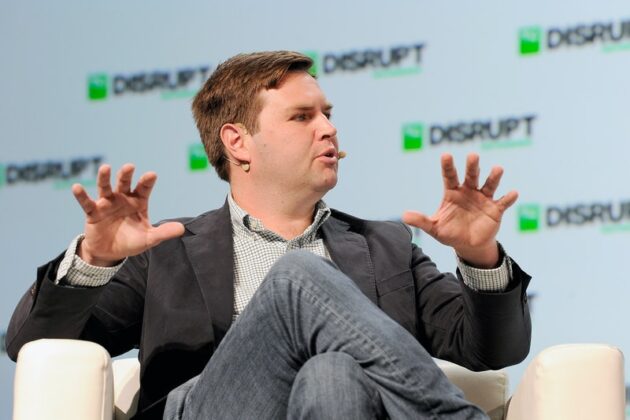 James David Vance shortly known as J. D. Vance is an American author and venture capitalist. He is best known for his memoir “Hillbilly Elegy”. As of 2020, J D Vance net worth is estimated to be roughly $7 million.

Vance was born on August 2, 1984, in Middletown, Ohio to parents Donald Bowman and Bev Vance. He also has a sister named Lindsay. Vance’s parents divorced when he was a toddler and he was adopted by his mother’s third husband. Vance and his sister were raised mostly by his grandparents.

Regarding his education, Vance went to Middletown High School. After graduating from school, he joined the United States Marine Corps and served in Iraq where he performed public affairs activities. He then received his B.A. degree in political science and philosophy from Ohio State University. Vance then received his J.D. degree from Yale Law School. It was in his first year of law school that one of his professors gave him the idea to write his memoir.

After graduating from law school, he worked in a venture capital firm ‘Mithril Capital Management’. One of his biggest achievements as a venture capitalist is that raised $93 million for Narya Capital, based in Ohio. In 2016, he launched a plan to start a nonprofit organization on combating drug addiction in the Rust Belt called “our Ohio Renewal”.

In June 2016, he published his memoir “Hillbilly Elegy: A Memoir of a Family and Culture in Crisis”. The book was a massive hit and remained on the New York Times Bestseller list for two years. The book was also a finalist for the Dayton Literary Peace Price in 2017. The book is about the Appalachian values of his upbringing and their relation to the social problems of his hometown.

In addition to that Vance has also shared his ideas and political views appearing on major news networks like ABC News, CBS News, CNN, and Fox News. He has also been a CNN Contributor since January 2017.

The 2020 Netflix movie “HillBilly Elegy is based on his book. The movie stars actors Glenn Close, Amy Adams, and Gabriel Basso in the main roles.

Who is J D Vance Wife?

Vance is married to Usha Chilukuri. She is one of his former law school classmates and belongs to an Indian-American heritage. She was a law clerk to Supreme Court Chief Justice John Roberts during the 2017-18 term and then clerked judge Brett Kavanaugh in 2014-15.

Vance and Usha have two sons, including Ewan.

As of 2020, J D Vance’s net worth is estimated to be roughly $7 million. A vast chunk of that money comes from his bookselling and during his time as a venture capitalist. He also earns some extra bucks by appearing on various news networks.