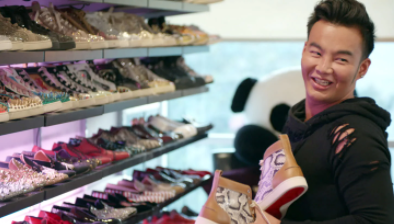 Kane Lim is one of the wealthiest cast member in the Netflix’s hit show – Empire Bling. As a Singaporean entrepreneur Kane Lim has a net worth of $20 million.

In the show, he is close friends with Kevin Kreider.

Who is Kane Lim in Reality?

Kane Lim is 31 years old Singaporean living in Los Angeles and was introduced to Bling Empire show as a fashion devotee. Kane Lim is a practicing Buddhist, he adopted this religion three years ago. During an interview, he said that for the past three years he has not touched meat and have stopped smoking. He also frequents the hawker center next to Guan Yin Temple at Balestier, which only serves vegetarian dishes.

Apart from this, like any other Singaporean make, Kane had served a mandatory two years in the army. Recently, in the Instagram post, Kane proudly showed off his SAF identity card.

It is also said that at the age of 17, he took a loan from his father and invested in the business. This investment paid off and has been earning a fortune through it. He started investing in fashion and stocks at the age of 17 and was able to pay back the loan to his father.

All of this contributed to Kane Lim’s net worth.

Kane Lim, born in Singapore, and raised into a family whose staggering wealth comes from real estate, oil and shipping. The lights may be on Kane, but ironically, he neither talks about his private matters and he keeps his his family business away from the light.

Nine years ago, Kane moved from Singapore to L.A. to challenge himself independently. He has said that while Singapore will always be his home, creativity and expansion could not be achieved there.

Since everything back home was easily accessible for him given his family status, he wanted to strive to build his own name by himself.

In his Instagram bio, Lim describes himself as a real estate developer, investor, and philanthropist. He reportedly runs an investment fund in LA with a portfolio that includes real estate deals.

Kane Lim loves designer shoes and he almost owns 300 pairs of designer shoes. His shoe collection is estimated to be around $300,000. Apart from this, his wealth comes from his early investments and initial support from his wealthy family. All this contributes to Kane Lim’s net worth of $20 million.