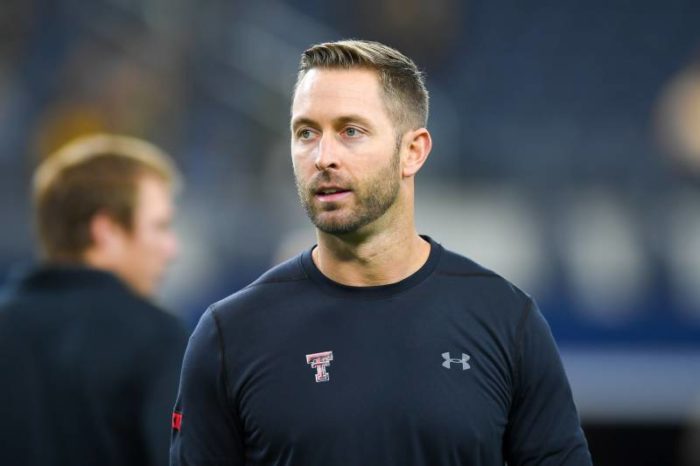 Kliff Kingsbury is an American football coach and a retired player. He is the current head coach for the Arizona Cardinals of the NFL. As of 2020, Kliff Kingsbury net worth is estimated to be around $7 million.

Kingsbury was born on August 9, 1979, in San Antonio, Texas to Tim and Sally Kingsbury. His father is a Vietnam War veteran and Purple Heart recipient. His mother died in 2005 of soft tissue sarcoma.

He went to New Braunfels High School where he started playing football under the head coach Tim, his father. He was also a member of the baseball, basketball, and track teams. During his time at school, he was an Academic All-State selection and was also named the offensive MVP in the Texas High School Coaches All-Star Game. Kingsbury was inducted into the Texas High School Football Hall of Fame in 2018.

Kingsbury played his college football for the Texas Tech Red Raiders. He played a total of 43 games at Texas Tech, completing 1,229 of 1,881 passes for 12,423 yards with 95 touchdowns and 40 interceptions. In his college playing career, he had 39 school records, 13 Big 12 Conference records, and 7 NCAA FBS records. Kingsbury graduated in 2001 with a Bachelor of Business Administration degree in Management from the Rawls College of Business.

Kliff was selected by the New England Patriots in the 6th round of 2003 NFL Draft. He didn’t play his rookie season spending the year on injured reserve. He was waived by the Patriots in 2004 and was signed by the New Orleans Saints. On September 6, 2005, Kingsbury was signed to the Denver Broncos’ practice squad and was released 15 days later. He then signed with the New York Jets. His NFL debut came on November 20, 2005, against the Denver Broncos.

In 2006, Buffalo Bills signed Kingsbury but he didn’t feature in any professional game. He also played for some years at NFL Europe and Canadian Football League.

Regarding his coaching career, he started his coaching as an assistant for the University of Houston from 2008 to 2011. Kingsbury served as a head coach of Texas Tech University from 2013 to 2018. Prior to that, he was the offensive coordinator for Texas A&M University. On January 8, 2019, Kingsbury took the job as the head coach of the Arizona Cardinals. He got his first win as a coach in NFL on October 6, 2019, against the Cincinnati Bengals.

As of 2020, Kliff Kingsbury net worth is estimated to be around $7 million. Some websites report his net worth to be over $15 million. Kingsbury signed a 5-year contract worth $10.5 million and an average salary of $2.1 million every year. Currently, his annual salary is reported to be $3.7 million.

Anthony Lynn Net Worth 2020: How Rich is the Chargers’ Head Coach?