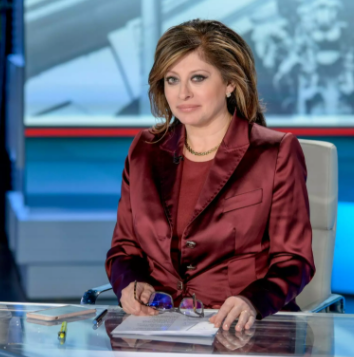 Maria Sara Bartiromo is a famous American journalist, author and political commentator. Maria Bartiromo has an estimated net worth of $40 million from her career in the media and journalism industry.

Bartiromo was born on 11th September 1967 in Brooklyn, New York City. Her parents Vincent and Josephine Bartiromo are Italian-American. Her father owns a restaurant called Rex Manor in Brooklyn while her mother is a hostess seating guests.

She attended Fontbonne Hall Academy in Bay Ridge and later proceeded to New York University for her Bachelor of Arts degree in journalism and economics. She is married to Jonathan Steinberg a chief executive officer at Wisdom Tree Investments since 1999.

After graduating, Bartiromo started working for CNN on internship. She later became an executive producer and assignment editor with CNN Business, a position she held for five years.

From her nickname Money Honey, she applied for a trademark to use the name in a collection of her children products such as toys, puzzles and colouring books that are used to teach children about money.

She has also authored three books namely; Use the News- How to Separate the Noise from the Investment Nuggets and Make Money in Any Economy published in 2001, The 10 Laws of Enduring Success published in 2010 and The weekend that Changed Wall Street published in 2011.

Apart from writing and reporting news, Maria has appeared in some films including Risk/Reward which is a documentary about women in Wall Street and the remake of Taking of Pelham 123, among others.

She left CNBC in November 2013 to join Fox Business for a role in the Fox News. She has conducted several interviews with the US President Donald Trump which has been described as friendly.

Maria received the Excellence in Broadcast Journalism Award in 1997 and the Lincoln Statue Award in 2004. She also received the Gracie Award for Outstanding Journalism in 2008 and two Emmy Awards in 2008 and 2009 consecutively. She is the 3rd journalist to be inducted into Cable Hall of Fame in 2011.

Maria Bartiromo Net Worth is $40 Million

Maria Bartiromo has an estimated net worth of $40 million. Her main source of income is her journalism career, sale of her books and children products. She had an approximate annual salary of $6 million while at CNBC and about $10 million from Fox.