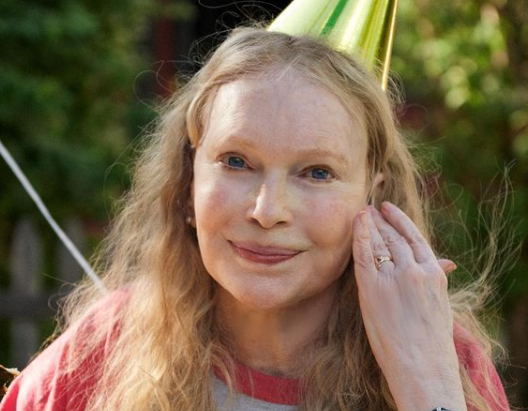 Mia Farrow Net Worth: Mia Farrow is a legendary American actress and former fashion model. She has worked in more than 50 movies and has been the recipient of numerous awards. Mia has shown her exceptional performance in many movies. Her most noticeable movies include “Rosemary’s Baby”, “The Ex”, “The Omen” and “Dark Horse”. As of 2021, Mia Farrow has accumulated a huge net worth amount of $60 million.

Mia Farrow was born Maria de Lourdes Villers Farrow on February 9, 1945, in Los Angeles, California. Her father John Farrow was an Australian director and her mother Maureen O’Sullivan was an Irish actress. Mia grew up with six other siblings. She had a strict Catholic upbringing by her parents.

Mia was inherited acting skills from her parent’s genes. In fact, she made her movie debut at just two years of age in the short documentary “Unusual Occupations: Film Tot Holiday”.

Her childhood had been troublesome somehow, as she suffered from polio at nine years old. She even spent three weeks in an isolation ward. Mia studied at parochial schools for her primary education. In 1958, she and her sister were sent to boarding school in Surrey. Just after a month on October 28, she lost her brother in a plane crash.

At 16 years of age, she came back to U. S. and studied at a Catholic preparatory school. After a year, she lost her father due to a heart attack. Her family went through a financial crisis after her father’s demise.

Mia initially started off her career as a fashion model. In 1965 she auditioned for the role of Leisi for the movie “The Sound of Music”. However, she was not selected. During the 1960s, she appeared in many movies playing supporting roles.

Mia’s breakthrough role came in the 1968 psychological horror movie “Rosemary’s Baby”. She was highly praised for her remarkable performance in the movie. She even earned Golden Globe Award in the category of New Star of the Year-Actress. Soon, after that, she established herself as a leading actress.

During the 1970s she appeared in many classical plays in London. The most noticeable role came as Joan of Arc in 1971 Royal Shakespeare Company’s production “Jeanne of Arc au Bucher”.

Mia also became famous when she collaborated with filmmaker Woody Allen. She has starred in his 13 movies. Her most popular movies with Woody include “A Midsummer Night’s Sex Comedy”, “Broadway Danny Rose”, “The Purple Rose of Cairo”, “Alice and “Hannah and Her Sisters”.

Besides movies, Mia also became popular on the small screen. Her exceptional performance in the crime drama TV series “Third Watch” was highly praised by the audiences. Mia’s most recent movie work came in “The Omen”, “Be Kind Rewind” and “Dark Horse”.

Mia Farrow is currently single. However, she has been married twice. Her first marriage with actor Frank Sinatra lasted just for two years. In 1970, she got married to German-American pianist Andre Previn. She spent 9 years with him, finally divorcing in 1979.

Mia also had a love relation with filmmaker Woody Allen. She was in a relationship with him for twelve years. She separated from Woody in 1992. Mia publicly made an allegation on Allen that he sexually assaulted their adopted daughter named Dylan.

Mia Farrow has generated a huge net worth amount equal to $60 million by 2021. Mia has also been involved in humanitarian activities. In 2000, she was appointed UNICEF Goodwill Ambassador.

She is also working for the welfare of children’s rights. Mia has been awarded the Marion Anderson Award, the Lyndon Baines Johnson Moral Courage Award, and the Leon Sullivan International Award for her humanitarian work.