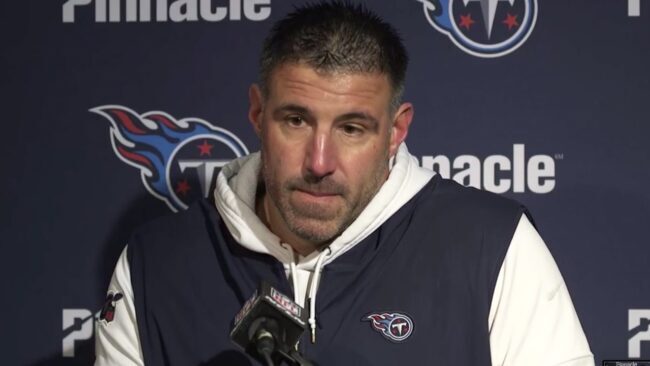 Mike Vrabel is an American football head coach and a former player. He is currently the head coach of the Tennessee Titans of the National Football League. As of 2020, Mike Vrabel net worth is estimated to be around $10 million.

Vrabel was born on August 14, 1975, in Akron, Ohio. He went to Walsh Jesuit High School where he started playing football. He graduated from high school in 1993. Vrabel then received an athletic scholarship to play for the Ohio State University. He played as a defensive end from 1993 to 1996.

As a senior in 1996, he was recognized as a consensus first-team All-American. In 1995 and 1996, he was named the Big Ten Defensive Lineman of the year becoming only the second player to ever win the award twice. In 2012, he was inducted into the Ohio State Athletics Hall of Fame.

Regarding his playing career, Vrabel was drafted by the Pittsburgh Steelers in the third round of the 1997 NFL Draft. He played four years for the Steelers before joining the New England Patriots as a free agent for the 2001 season. He became an All-Pro and a three-time Super Bowl Champion with the Patriots. Vrabel then finished his playing career with the Kansas City Chiefs.

After retiring as a player in 2011, Vrabel decided to become a linebackers coach at Ohio State. Three years later, he was hired by the Houston Texans as a linebackers coach. He spent three seasons with the Texans and during that time, the Texans ranked third in the NFL in yards allowed per game. In January 2017, he was named as the Texans defensive coordinator.

On January 20, 2018, Vrabel was hired by the Tennessee Titans as the head coach on a five-year deal. His first win as a head coach for the Titans came in Week 2 of the season where he won against Houston Texans by score 20-17. Under his leadership, the Titans’ defense improved from the 13th ranked defense in 2017 to the eighth-ranked defense in 2018. Unfortunately, his team narrowly missed the playoffs by one game and finished that season with a 9-7 record.

In 2019, Titans finished once again with a 9-7 record but managed to make the playoffs as a six-seed. N the Wild card round, his team managed to upset the defending champion New England Patriots. With that win, they advanced to their first AFC Championship but were eliminated by the eventual Super Bowl LIV champion Kansas City Chiefs.

Regarding his personal life, Mike is married to Jennifer Vrabel. Together they have two sons named Tyler and Carter Vrabel. Tyler currently plays offensive line for the Boston College Eagles football team while Carter committed to play baseball at Wabash Valley College.

Dan Quinn Net Worth 2020: How Rich is the Falcons’ Head Coach?