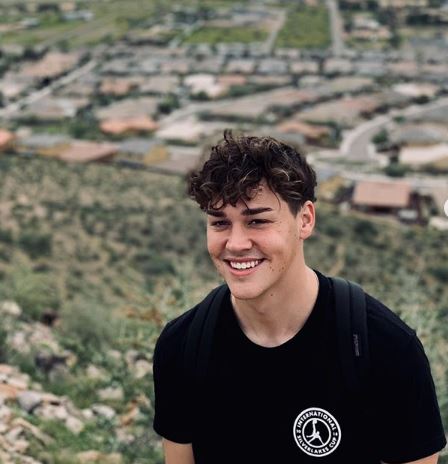 Noah Beck is an American Social media star who is popular on the video-sharing app TikTok. He usually posts lifestyle, sports, and comedy-related content on his profile. As of January 2021, his TikTok profile has more than 24 million fans.

Noah was born on May 4, 2001, in Arizona, United States. Not much information is available regarding his father and mother. What we know is that he has two older sisters named Tatum and Haley in his family.

Regarding his relationship status, we have no clear information on whether he is dating someone or not. He might be single right now.

Aside from being famous on social media, Noah is also an athlete. He played soccer at the NCAA Division-1 level. He started playing soccer at the Real Salt Lake Academy High School.

At the Real Salt Lake Academy, he was a frequent starter in the team and led his team to a regional championship. He was a team captain with SC Del Sol and led his team in goals. From 2014 to 2017, Noah played with the ODP state team and was a team captain. He was a two-time all-tournament team selection, three-time regional camp, and two-time regional pool. In 2019, he played a total of 17 games and scored a total of 4 goals in the process.

Regarding his social media status, Beck now has more than 19 million fans on his TikTok account. He usually shares lifestyle, comedy-related videos on his profile. Most of his videos are with his friends.  He also has a large fan following on his Instagram account. As of November 2020, he has over 6.3 million followers and that number is going to increase rapidly in the coming months. Noah shares mostly fitness, lifestyle, soccer, and fashion-related content on his Instagram profile.

At the current age of 19, Noah Beck stands at a height of 5 feet 11 inches or 183 cm tall and weighs around 82 kg or 180 pounds. His chest size, arms size, and waist size are not available at the moment. Likewise, his hair color is light brown and eye color is dark brown.

Noah Beck’s net worth is estimated to be somewhere around $3 million to $4 million. He earns money from his social media accounts via sponsorships and endorsements promoting different products.