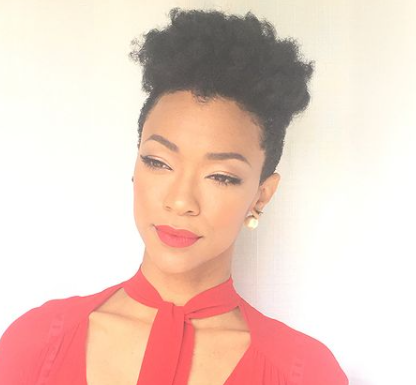 Sonequa Martin-Green is also known for her role in the 2021 movie, Space Jams 2 (Space Jam: A New Legacy) with Lebron James.

Sonequa Chaunte Martin was born on March 21, 1985, in Russellville, Alabama, U. S. She grew up with a sister and 3 half-sisters. Sonequa, earlier had a plan of becoming a psychologist, though she didn’t have any plan of pursuing a career as an actress. Sonequa instantly developed an interest in acting while rehearsing for some act during 10th grade.

She completed her graduation from the University of Alabama with majoring in theatre. Sonequa played a minor role in her early movies. Her first movie appearance came in 2005, where she was seen playing the role of Coco Delight in the movie “Not Quite Right”. After that, she played small roles in the movies “I-Can-D” and “Blind Thoughts”.

Sonequa earned her breakthrough role in the 2009 movie “Toe to Toe”. Her spectacular performance as Tosha Spinner in the movie received positive acclaims from audiences. Following the much-needed break, she was seen in other movies like “River Wash Over Me”, “Yelling to the Sky”, “Holiday Rush” and “The Outside Story”. Sonequa will be seen portraying the role of Savannah James in the upcoming movie “Space Jam: A New Legacy”.

The brilliant actress, Sonequa has also shown her magical performance in many television series. She made her small screen debut in 2008, portraying the character of Kiana Richmond in “Law & Order: Criminal Intent”. She earned her first recurring role as Courtney Wells in the TV series “The Good Wife” in 2009.

After that, she continued to impress audiences with her eye-catching performances in the TV series “Gossip Girl”, “NYC 22”, “The Walking Dead”, “Once Upon a Time”, “Lip Sync Battle”, “New Girl” and “Penn Zero: Part-Time Hero”. Sonequa is currently playing the role of Michael Burnham in the popular TV series “Star Trek: Discovery”.

At the current age of 36, Sonequa Martin-Green stands at a height of 5 feet 4 inches or 162 cm tall and weighs around 52 kg or 115 pounds. Her body measurements are not available at the moment.

Sonequa Martin-Green is married to an American actor, Kenric Green. The celebrity actors fell in love with each other after their first meet at McCarter Theatre, while performing on the theatre play “Fetch Clay, Make Man”. Sonequa has a son named Kenric Justin Green III, who was born on 10th January 2015. She is presently living a happy moment with her husband and son in Los Angeles, California.

Sonequa Martin-Green has amassed an enormous fortune of $2 million by 2021. She has earned the hefty sum all from her acting career, working in various movies and TV series.