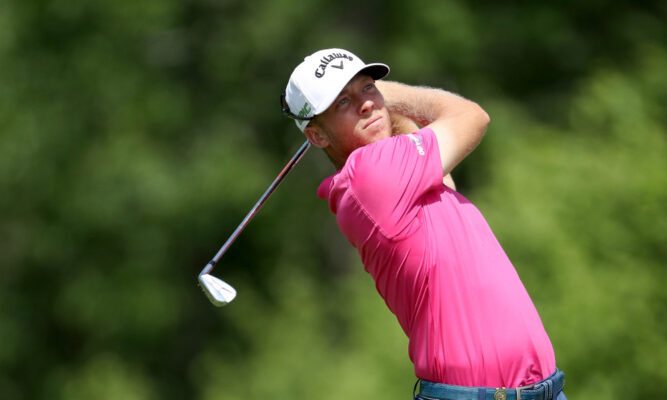 Talor Gooch is an American golfer who plays on the PGA Tour. As of 2020, Talor Gooch net worth is estimated to be in the range of $1 million to $1.5 million.

Gooch was born on November 14, 1991, in Midwest City, Oklahoma. Gooch started playing golf from an early age. He played his collegiate golf at Oklahoma State University. As an amateur, he is the winner of the 2012 Oklahoma Stroke Play. He also won the U.S. Kids World Junior Championship at the age of 9 with his dad caddying.

He turned professional in 2014 and played on the PGA Tour Canada in 2015 and 2016. In the 2015 season he played in 12 events on Mackenzie Tour and posted three top-10s and finished No. 17 on the Order of Merit. His best finish in the 2015 season was when he finished second at the Syncrude Boreal Open.

2017 was his biggest year in terms of golfing as he played on the Web.com Tour and won the News Sentinel Open. He finished sixth on the regular-season money list and earned a pass to a PGA Tour card for 2018.

In the 2018 PGA Tour, he made 12 cuts in 27 events with a best finish of T13 at the Wells Fargo Championship. He finished that season No. 139 in the FedEx Cup. In 2019, Gooch advanced to the FedEx Cup Playoffs for the first time, finishing No. 101 in the FedEx Cup standings. He had two top-5 finishes early in the 2019 season.

Related Posts  Viktor Hovland Net Worth: How Rich is the Norwegian Golfer?

Regarding his personal life, Talor is married to his longtime girlfriend Ally Gooch. She is an owner of ‘The Modern Cookies’.