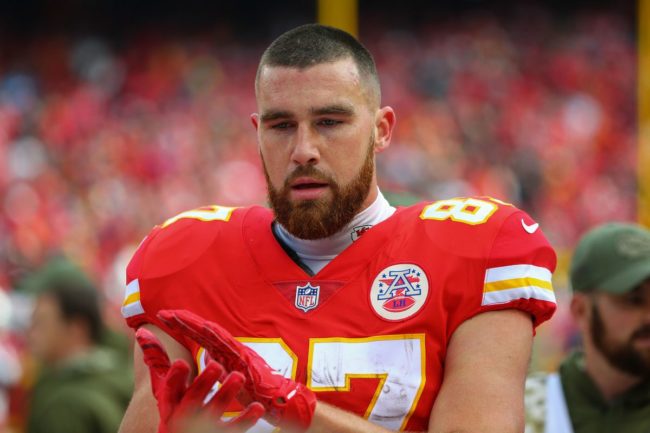 Travis Kelce is an American football player who plays as a tight end for the Kansas City Chiefs of the National Football League. As of 2020, Travis Kelce net worth is estimated to be $15 million.

Kelce was born on October 5, 1989, in Westlake, Ohio. He went to Cleveland Heights High School where he was a three-sport athlete in football, basketball, and baseball. During his time at school, he won All-Lake Erie League honors after totaling 2,539 yards of total offense as a senior.

Kelce was offered a scholarship from the University like Akron, Eastern Michigan, and Miami. But he decided to play for the University of Cincinnati. He joined his brother Jason Kelce who was the starting left guard for the Bearcats.

In 2009, he recorded eight rushes for 47 yards and two touchdowns along with one reception for three yards. Kelce was suspended in 2010 for violating the team rules. In the last season of his college career, he set personal records in receptions (45), receiving yards (722), yards per receptions (16.0), and receiving touchdowns (8). He was also named winner of the College Football Performance Awards Tight End of the Year.

In 2013, Kelce was drafted by the Kansas City Chiefs in the third round of the NFL Draft. He signed to a four-year, $3.12 million contract which included a signing bonus of $703,304. In his rookie season, he just played one game.

Kelce in his second season with Chiefs was the leading receiver totaling 862 yards off 67 receptions. After his outstanding second and third season with Chiefs, Kelce was awarded a five-year contract extension worth $46 million. He was ranked 91st by his fellow players on the NFL Top 100 Players of 2016.

Kelce finished the 2016 season with career-high in yards (1,125) and receptions (85). He was named as a starter in his second career Pro Bowl. Moreover, he was also named First-team All-Pro. Kelce was ranked 26th by his fellow players on the NFL Top 100 players of 2017.

2019 was his biggest year. He finished that season with 97 receptions for 1,229 receiving yards and five receiving touchdowns. With that record, he became the first tight end in the NFL history to record four consecutive seasons with at least 1,000 receiving yards. Kelce also helped his team to win Super Bowl LIV against the San Francisco 49ers. He caught 6 passes for 43 yards and a touchdown and had 1 carry for 2 yards during 31-20 win.

Travis Kelce stands at a height of 6 feet 5 inches or 1.96 m tall and weighs around 118 kg or 260 pounds. His chest size, arms size, and waist size are 43 inches, 15 inches, and 40 inches respectively. Meanwhile, his hair color and eye color are both dark brown.

Matt Rhule Net Worth: How Rich is the Panthers’ Head Coach?