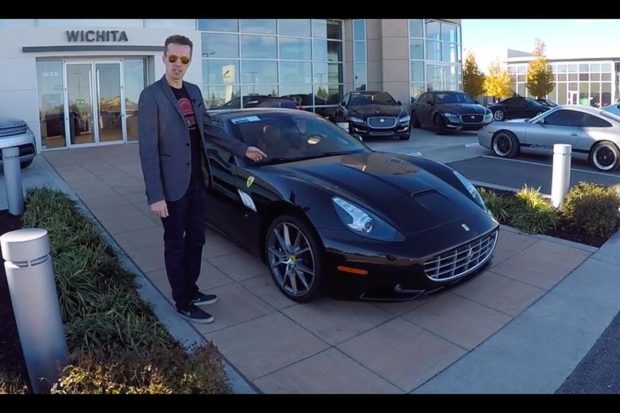 Tyler Hoover Net Worth: Tyler Hoover is an American YouTuber who runs the channel “Hoovies Garage”. He posts video content related to his large collection of cheap enthusiast vehicles. As of 2021, Tyler Hoover’s net worth is estimated to be $1.8 million.

Tyler Hoover grew up in Wichita, Kansas. He went to high school in Andover and graduated in 2005. Five years later he graduated from Wichita State University with a bachelor’s degree in Political Science and  Government. From an early age, his passion and interest in cars were visible to everyone. He had a collection of around 100 model cars.

In 2016 he started his YouTube channel “Hoovies Garage”, which has over 1.2 million subscribers.

While studying at University, he started working as a car salesperson for Joe Self Chevrolet, Cadillac, and BMW, dealerships in Wichita, Kansas. After graduating in 2010, Hoover decided to start his own dealership. He named it “Ad Astra Automotive”. His goal was to find good, quality cars at auctions and then resell them for profit. After five years of working, Tyler ended his business in 2015. That was because the business was unprofitable.

After leaving the car dealership business, Tyler began working as an Opening Coordinator & Operations Support for FFC Midwest. FFC Midwest owns more than 20 Freddy’s Frozen Custard and Steakburgers franchise locations. Hoover would often promote new locations on TV. As we mentioned previously, he made his YouTube channel in 2016. He became fully dedicated to it in 2018 when he left the company. At that time he also filmed a reality television series.

His YouTube channel ‘Hoovies Garage’ is about cars obviously but, more specifically he buys cheaper and damaged cars and then, he repairs and sells them. He buys interesting cars like Tesla Model S, Bentley Continental GT, or Mercury Marauder, and many others. Tyler often gives the cars a real makeover. In 2017, he spend more than $50,000 on fixing his cars. He has his own mechanic known as “The Car Wizard”.

On his channel, he also makes reviews for different cars he finds interesting. As we mentioned previously, he filmed a reality show too. The show was named “Car Issues” and the first episode aired on June 8, 2019.

Looking at his videos, Tyler certainly looks like a tall guy. He stands 5 feet 11 inches or 180 cm tall and weighs 75 kg or 165 pounds. His chest size, waist size, and arms size are not known to us. Meanwhile, his hair color and eye color are both dark brown.

As of 2020, Tyler hoover’s net worth is estimated to be in the range of $1.5 million to $1.8 million. With his YouTube channel, Tyler Hoover really made a good income for himself. It is known that when having a successful YouTube channel, you can make a lot of money. Tyler’s videos have more than 100k views each. He has a lot of fans and likes on his videos.

Hoover’s net worth is speculating to be around $1.5 to 2 million. His YouTube channel (as of September 2020) has more than 1.09 million subscribers. With that many views and subscribers, the only for him to go is up.

Ryland Storms Net Worth: How Rich is the TikTok Star Actually?