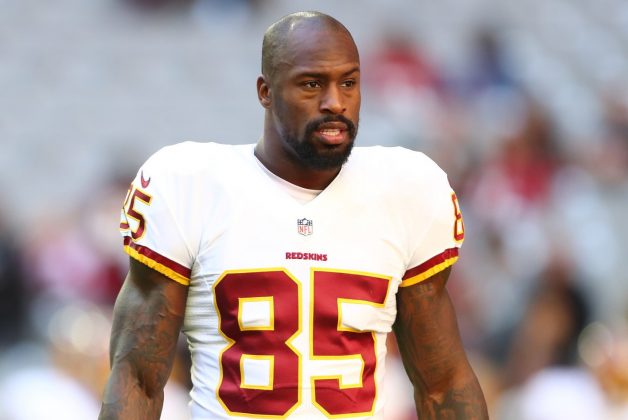 Vernon Davis is an American retired football player. He is known for playing football for teams like San Francisco 49ers, Denver Broncos, and Washington Redskins. As of 2020, Vernon Davis net worth is estimated to be $16 million.

Davis was born on January 31, 1984, in Washington, D.C. He attended Truesdell Elementary followed by Paul Public Charter School where he started playing football. He then went on to attend Dunbar High School where he was a letterman in football, basketball, and track & field.

After his high school football, he enrolled in the University of Maryland where he majored in studio art and played football for the Maryland Terrapins football team. In his freshman season, he had 5 receptions for 87 yards and eight solo tackles. Davis was named a Consensus All-American and All-Atlantic Coast Conference team selection. He finished his college career with 1,371 yards on 83 receptions for 16.5 yards per catch.

In 2006, Davis was selected by the San Francisco 49ers in the first round of the NFL Draft. Davis in his rookie season had 265 yards receiving on 20 catches and averaged 13.2 yards per reception. In 2010, Davis signed a five-year contract extension with the San Francisco 49ers for $37 million with $23 million guaranteed. With that deal, Davis was the league’s highest-paid tight end. He finished that season with 56 catches and 914 yards, averaging 16.3 yards per catch.

2012 was his successful season with the 49ers as he helped his team to win the NFC Championship and also entered the Super Bowl for the first time in 18 years. In Super Bowl XLVII, he had 6 catches for 104 yards but lost narrowly 34-31 to the Baltimore Ravens.

Related Posts  JB Holmes Net Worth: How Rich is the Golfer in 2020 Actually?

In 2015, Davis was traded to the Denver Broncos. A year later, he won his first Super Bowl championship after the Broncos defeated the Carolina Panthers by a score of 24-10. On March 31, 2016, he signed a one-year contract with the Washington Redskins. A year later he signed a three-year contract extension where he played till 2019. He announced his retirement via a Fox NFL skit on February 2, 2020.

Davis is now one of the contestants competing in the 29th season of Dancing with the Stars.